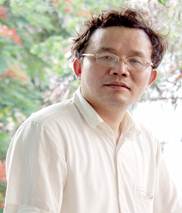 Cao Shuji, male and a native of Jiangxi Province, was born in 1956. In 1989, he graduated from the Institute of Chinese Historical Geography, Fudan University, with his Doctor’s degree in History. Since 2004, he has been a professor and Ph.D candidate supervisor, and the director of Department of History, Shanghai Jiao Tong University.

2, The Migrant history of China, vol.6，"Period of Qing Dynasty and the Republic of China ". Fuzhou: fujian people press, 1997.